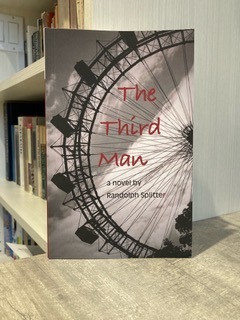 Two families whose lives intersect, two refugees who travel far-flung paths: from Vienna in the 1930s to England in the 1940s—and back—The Third Man is a novel about dispossession, refuge, and the morally complex search for justice and humanity. The novel was inspired by the author's family. His parents left Vienna in 1938, and his first cousins (Sir Erich Reich and his brothers) were on the Kindertransport to England.

Randolph Splitter has previously published three books: The Ramadan Drummer (Pandamoon), a novel about clashing values and the search for connection in a multicultural world; the novella/story collection Body and Soul (Creative Arts); and a psychoanalytic study of Marcel Proust from Routledge & Kegan Paul. His short stories have appeared in such places as the Chicago Quarterly Review, JewishFiction.net, and Akashic Books’ Mondays are Murder series. He’s also written prize-winning screenplays and made short films.

He graduated Phi Beta Kappa from Hamilton College; earned a Ph.D. in English from the University of California, Berkeley; and taught literature, creative writing, and composition at Caltech and De Anza College. He currently lives with his wife in Portland, Oregon, where he writes novels, dodges raindrops, and exercises his social conscience.

"The Third Man is an artful, tremendously absorbing novel, rich with the humanity of its characters, exquisitely told. Splitter's achievement is powerful, thrilling, and unforgettable."
—Elizabeth McKenzie, author of The Portable Veblen

"Randolph Splitter has woven a rewarding tale of exile and the hardship of healing. Exhaustively researched, every page rings true. A fascinating and important story."
—Martin Fletcher, former Middle East correspondent and author of The List, Jacob's Oath, and other books

"The Third Man title borrowed from Carol Reed's movie is put to ingenious use in this affecting novel about Jewish refugees from Vienna - a girl saved thanks to a kindertransport, and a butcher's apprentice who jumps ship in England. The result is a powerful depiction of Vienna in the 1930s and Britain in the 1940s, where two rootless and bereaved people rebuild the future they had lost."
—Brigid Grauman, Belgian-based journalist and author of Uncle Otto's Puppet Theatre: A Jewish family Saga

"A brilliantly researched book, set in Vienna, on the terrible impact of Hitler on predominantly Jewish parents and their families in the years up to the second world war which led to many making the unimaginable decision to let their children go on the Kindertransport in 1939 to England without them. And then to try to understand what that meant for child refugees then and now faced with a new country, language, and culture. A moving and emotional read for everyone and a very personal experience for me as a Kindertransport child who survived without parents from the age of 4."
—Sir Erich Reich, former Chair of the Kindertransport group of the Association of Jewish Refugees (UK)

"As a historical novel should, The Third Man explores history through the story of characters whom the reader cares about and who are confronted with that history. The history that the novel illuminates is a traumatic one, the fate of European Jews during the 1930s and 1940s …. The novel benefits from excellent historical research and the skillful way it intertwines the personal stories of the main characters with the larger history. The story is never simplistic in its depiction of the historical, moral, and existential problems its characters confront. This book is a compelling read—it is hard to put it down."
--Rick McCormick, Professor Emeritus of German, University of Minnesota, author of Sex, Politics, & Comedy: The Transnational Cinema of Ernst Lubitsch

... opens as a conventional (but compelling) mystery... [yet] goes much deeper. In his novel, [Splitter] explores questions of faith and fanaticism—and of love's ability to transcend both... The book soars because of its honest engagement with human complexity.
—Mark Brazaitis, author of many books of fiction and poetry, including The River of Lost Voices: Stories from Guatemala, Julia & Rodrigo, and Truth Poker

... an ingenious detective novel set in the contact zone of cultures in an unnamed American city, where violence is always possible but where humanity endures. Splitter tackles the great issues of our time with wit and vision, and I couldn’t put this novel down.
—Elizabeth McKenzie, author of Stop That Girl, MacGregor Tells the World, and The Portable Veblen